When you can’t shake the weight of depression, you need hefty ammunition. Pharmaceutical drugs are designed to adjust brain chemistry. However, they also render unpleasant side effects that you don’t get with most natural supplements for mood.

Supplements are a viable alternative. Certain amino acids and herbs boost chemicals that increase your emotional well-being. Here are five supplements for mood to help you regain equilibrium.

Your brain uses chemicals as messengers to communicate with other parts of your body. Known as neurotransmitters, these substances shuttle between nerve cells, governing body functions. Among the actions they control are thinking, eating, feeling, and sleeping.

Two neurotransmitters associated with depression are serotonin and dopamine. You can think of serotonin as the “confidence chemical.” It generates self-esteem, worthiness, and security. Dopamine is the “reward chemical.” It produces feelings of pleasure.

Frequently prescribed are Lexapro, Zoloft, Prozac, Celexa, and Paxil. Their labels display FDA warnings regarding safety. Additionally, these drugs don’t help 40% of people who try them. 2/

Drugs that increase dopamine can disrupt normal levels when taken long-term. 3/ Examples are Wellbutrin, Aplenzin, and Forfivo XL. Some antidepressants are implicated in liability lawsuits. 4/

Now, enough of the drawbacks of drugs. Here are five natural supplements that will help you quell blue moods.

Description – This herb contains therapeutic ingredients that elevate dopamine and serotonin. Among them are hypericin, hyperforin, and xanthones.

Clinical Evidence – Cochrane, a healthcare research organization, conducted a review of 29 trials involving over 5,000 patients with major depression. St. John’s wort was noted to be as effective as standard antidepressants. 5/

CAUTION – St. John’s wort limits the effectiveness of drugs for chemotherapy, birth control, organ transplants, and blood clot prevention. It’s unsafe to use with antidepressant drugs since it can cause serotonin levels to spike. 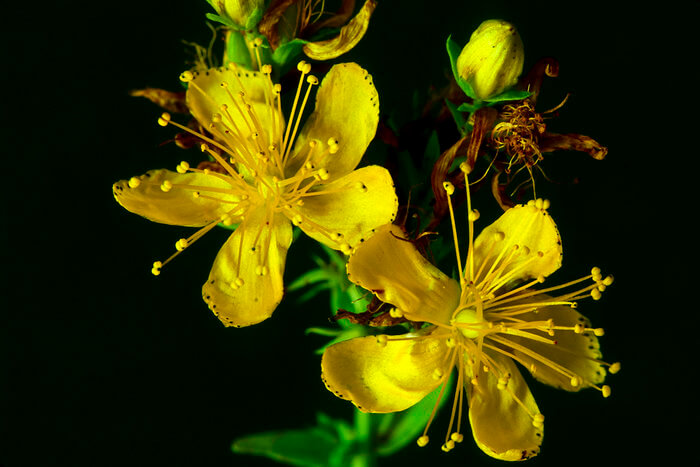 Description – This natural compound is already present in your body, primarily in your brain, liver, and adrenal glands. It affects both serotonin and dopamine. Depression is linked to a low level of SAMe.

Dosage – 400 to 1,600 mg a day, taken on an empty stomach. Start with 400 mg, 30 minutes before breakfast, for one week. If you don’t notice a positive effect, add a second dose, 30 minutes before lunch. An advantage of SAMe over prescription drugs and St. John’s wort is that it works quickly, often improving mood within days rather than weeks.

CAUTION – Don’t mix SAMe with drugs that impact serotonin release, such as Demerol, Ultram, levodopa, and Robitussin DM. If you have bipolar disorder, you should obtain your doctor’s approval before taking SAMe. It can worsen manic symptoms.

Description – Derived from green tea, L-theanine is an amino acid. It relaxes your mind while fine-tuning attention. L-theanine increases dopamine, serotonin, and GABA, a neurotransmitter that curbs excessive nerve cell activity. Within 30 to 60 minutes of taking L-theanine, you’ll feel depression and anxiety lift. Though it’s calming, it won’t make you drowsy.

Clinical Evidence – A 2008 study reported by the National Institutes of Health advises that L-theanine stimulates the production of alpha brain waves, reducing the effects of stress. 7/

CAUTION – If you’re taking chemotherapy drugs, consult your doctor before trying L-theanine, since it can increase their activity. Also, don’t take L-theanine simultaneously with cholesterol-reducing medication.

Description – This is an “adaptogenic” herb, protecting against depression, fatigue, illness, and tension. It boosts serotonin while simultaneously lowering your level of cortisol, a stress hormone. It also enhances the production of dopamine.

Clinical Evidence – A 2007 study reported in the Nordic Journal of Psychiatry showed that patients taking rhodiola extract had reduced symptoms of mild to moderate depression. They also enjoyed increased stamina and emotional stability. 8/

Dosage – 250 mg once or twice daily. Look for a standardized extract containing 3 percent rosavin and 1 percent salidroside. Since rhodiola is energizing, take it early in the day to avoid interfering with sleep.

CAUTION – Receive your doctor’s approval before taking rhodiola if you have diabetes or a heart condition.

Description – An essential fatty acid found in the brain, EPA is vital for cognitive and behavioral function. If you’re deficient, you may experience mood swings, fatigue, and poor memory.

Clinical Evidence – A 2015 study published in Molecular Psychiatry found that patients with major depression had a 30 percent increase in markers of brain inflammation. Supplementing with 1,060 mg of EPA for eight weeks achieved a significant reduction in brain inflammation and depression. 9/

For a 2002 study reported in JAMA Psychiatry, 1,000 mg of EPA was added to the subjects’ daily antidepressant regimen. At eight weeks, the patients reported less anxiety, sleeping difficulty, depression, and suicidal ideation. 10/

Another 2002 study published in the American Journal of Psychiatry doubled the daily dose to 2,000 mg for patients unresponsive to antidepressant therapy. After three weeks of supplementation, the participants reported feeling less guilt, worthlessness, and melancholy. 11/

The Mayo Clinic warns that it isn’t safe to mix prescription antidepressants and supplements. The combination can result in dangerously high levels of serotonin, a condition called serotonin syndrome.

If you’re currently taking an antidepressant, consult with your doctor before discontinuing it or adding a supplement.

Provided you’re not taking antidepressant medication, you can safely combine the above natural supplements. A 2013 study in Neuropsychiatric Disease and Treatment recommends their use for mood disorders. 12/ Spread their ingestion throughout your day. Here’s a guideline:

Remember the caveats that come with these supplements: