Is Multitasking Helping or Hurting You? (+infographic!)

As I’m writing this article, I have 3 tabs open in Google Chrome. I’ll probably open up at least 15 more by the time I’m finished. Chances are you have a similar habit and rarely ever have just a single tab open when you’re online. It’s all a part of our growing need to multitask as much as possible, thinking we’re being efficient and productive. Unfortunately, most of the times multitasking is counterproductive and causes unnecessary stress.

Thanks A Lot Technology

People have been multitasking for years, but the increase in the amount of gadgets available to us has made the idea of doing 10 different things at once more appealing than ever. Hell, the Microsoft Surface 2 Tablet is specifically marketed towards people who want to multitask.

There have been times when I’m sitting in class with my laptop on to take notes, my tablet on the desk to play Word With Friends, and my phone in my hand to read emails. It starts to become like a juggling act to see how many different things I can do at once.

All of the gadgets that we use are supposed to make life simpler. Your phone can get emails, texts, run apps, record video, take pics, and solve world hunger. But all these features can be a little overwhelming because all it does is make all of these activities available to you all at once.

So you’re using your phone or tablet to text, look up movie times, and check Facebook all at the same time. Some of you might be thinking, “what’s the problem?” Well, the problem is that most people aren’t nearly as good at multitasking as they think they are, which results in putting less effort into each individual task. 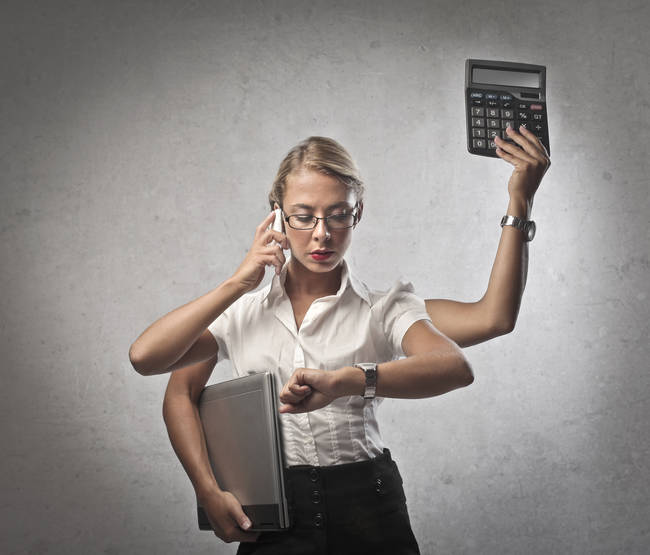 The primary issue with multitasking is that it goes against the way our brains are meant to function. No matter how good you think you are at multitasking, the brain can only handle two complex tasks at the same time. Any more than that and your brain isn’t able to completely process the new tasks. It’s like trying to juggle 4 chainsaws in the air when you’re really only able to handle 2. Sure, you might be able to pull it off, but you also have a higher chance of messing up and causing a big mess.

The reason we tend to force ourselves to multitask so much is because we have so much information coming at us in rapid fire mode. On any given website, the home page is loaded with 20,000 different things to click on. Whenever I go on sites like Mashable or Engadget, I end up opening 20 different tabs because I need to see all the newest articles. And they both add so much content throughout the day that it’s easy to get sucked in. You’d probably go crazy if we posted 10 articles a day on Mellowed.com!

On average, we consume about 15.5 hours of media A DAY. Now since there’s only 24 hours in a day, the reason we’re able to squeeze in 15 hours worth of media is because we’re consuming it all at the same time. You’ll watch a YouTube video on your laptop while checking your Twitter feed simultaneously.

Some of this has to do with the fear of missing out (FOMO). We want to make sure we don’t miss anything. I’m a culprit of this. I spend way too much time out of each day just trying to keep up with new interviews on the YouTube channels I subscribe to. If I don’t catch an interview, I feel like I’m out of the loop and don’t know what’s going on. It all goes back to how rapidly information comes to us, and how readily available it is because of our phones, tablets, and laptops.

Ok, all these stats are are interesting, but what does any of this have to do with stress?

You see, multitasking naturally stresses you out because you’re trying to juggle a lot more things than you’re comfortably able to handle. Multitasking can get you stressed out because:

In theory, multitasking is supposed to make life easier and more stress free. You’re supposed to be getting more work done is less time. But what ends up happening is that you don’t finish everything because you overwhelm yourself due to the reasons I talked about earlier. You can only stretch yourself so far before multitasking becomes counterproductive.

It’s Not All Bad

Even though multitasking can cause stress, there are times when its helpful. Being a college student, I’m forced to multitask all the time. And I end up doing way more than 3 things at once.

The good side of multitasking is that you actually can get more done in less time depending on what you’re doing. There’s times where I’m writing an article, listening to a podcast (Shout out to Entrepreneur on Fire!), and monitoring my Twitter account all at the same time. Is it the ideal situation? Absolutely not. But does it work? Most of the time.

Here’s some tips on multitasking the right way:

Stress from multitasking comes from biting off more than you can chew. If you know that you can only focus on one thing at a time, don’t force yourself to do 5 things at once. You’re going to cause yourself unnecessary stress.

Also, if you don’t have to multitask, then take your time and do one thing at a time. I only recommend multitasking when you absolutely need to. Trying to study for an exam and write a paper all in one night because you procrastinated is completely avoidable. Be smart about it.

As promised, here’s a cool infographic I found about multitasking, and how it can actually do more harm than good for a lot of people. Give your brain a break and stick to two tasks at a time when you can. You’ll get more done, and the quality of what you’re doing will be a lot better.

P.S. I just finished writing this article and I have 8 tabs open! I’ve opened and closed at least 20 tabs while I was writing this.