Meditation Statistics: How & Why People Meditate

It's no secret that meditation has become increasingly popular over the years. In the past few years in particular though, meditation has really hit the mainstream and pretty commonplace.

Thanks to apps like Headspace and Calm, plus the growing number of meditation studios popping up all over the country, it's easier than ever for everyone to start practicing.

Due to this rising popularity, we decided to collect some data and meditation statistics (all of our data is based on the U.S). But not just about how many people meditate. We wanted to learn more about how people practice meditation, why they do it (or don't do it) and what the average person's experience is with meditation.

The data we collected was super interesting, and sheds some great insights for people just starting to contemplate meditation or newbies who aren't sure of whether or not they're "doing it right". Hint, there is no "right" way to meditate!

First and foremost, according to data from the CDC, 14% of Americans meditate. 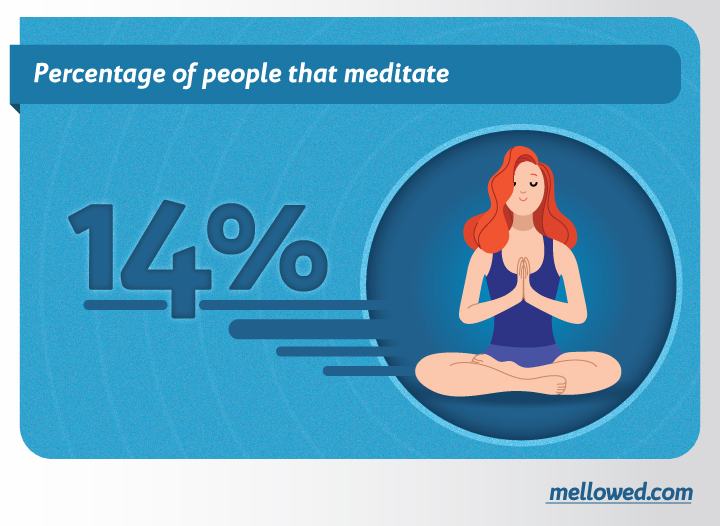 That might not seem like a huge number, but when you consider it was just 4.1% back in 2012, it's clear that meditation is no longer seen as just something "Yoga people" practice. And it's easy to see why.

Aside from all the apps that make it easier than ever to get started, there's also been a huge push from health and fitness experts promoting it.

When you hear about all the rich and successful people swearing by meditation as a key to their success, you can't help but to give it a shot. Not to mention all the influencers on Instagram and YouTube posting about how meditation is a important part of their morning ritual.

Long story short, meditation has grown significantly over the past 10 years and it shows no signs of slowing down. And this stat proves it.

But now that we've covered that, let's dive into some of our meditation statistics from our own survey.

70% of People Have Been Meditating For Less Than 2 Years

One of the questions we asked in our survey was "how long have you been meditating". Of those who meditate, 70% of have been doing it for less than two years. 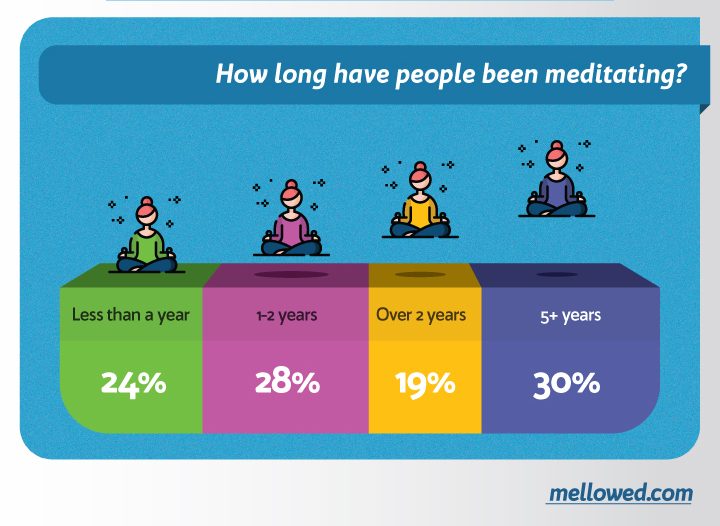 That's not too surprising since as we mentioned, meditation has really started becoming more mainstream over the past few years, which has motivated a lot of new people to get started.

Interestingly enough though, 30% of the people who currently practice meditation have actually been doing it for more than five years!

When you look at some of the long term benefits of meditation like mental clarity, less stress and improved focus, it makes sense that it's something most people tend to stick to for years.

If you're in the majority though and are fairly new to meditating, you might have some questions in regards to how to do it. Two of the most common questions we've seen and heard from beginners are:

Here's what our data showed.

If you’re curious about whether or not you’re meditating “enough”, here’s what our survey found: 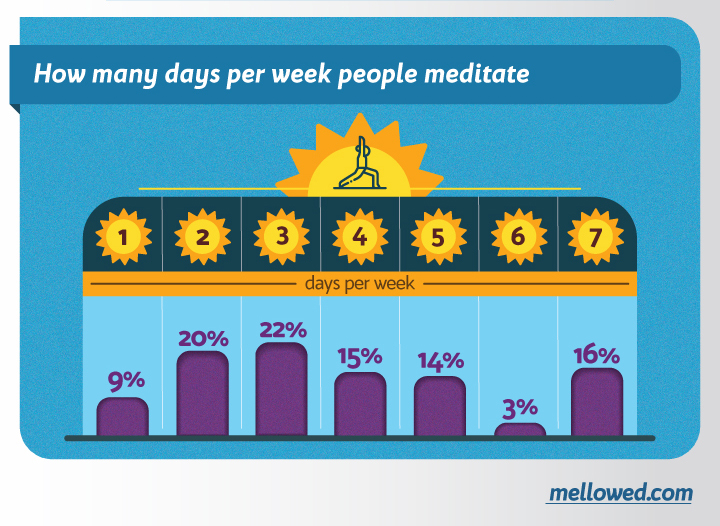 Obviously, you don’t have to follow any particular schedule. However a few days per week seems to be the average, and is pretty reasonable.

With work, family, a social life and everything else you have going on in life, finding the time to get away in a quiet place and meditate for a bit can be challenge. However, it seems like the more stuff you’re juggling in your life, the more you could probably benefit from a little meditation in your life.

As you’ll see a little later on, one of the top reasons people don’t meditate is because they don’t think they have the time. However, contrary to popular belief, meditation doesn’t take too much time according to the numbers.

88% of People Meditate For 30 Minutes or Less

Yup, that’s right. In less time than it takes to watch an episode of your favorite Netflix show, you could fit in a meditation session. 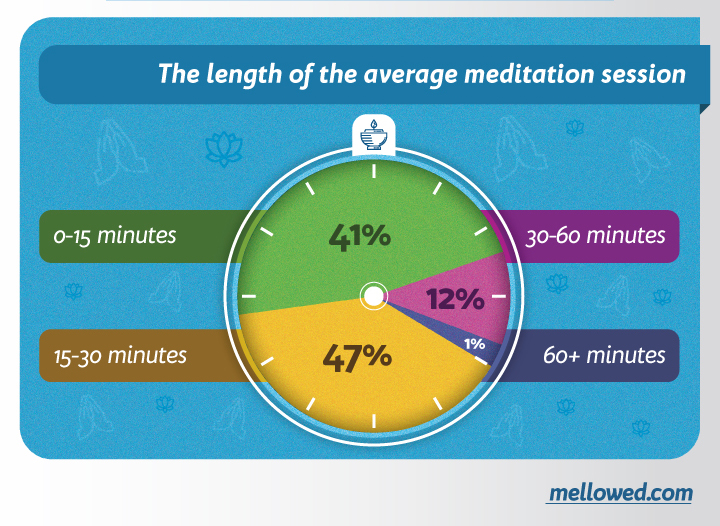 Our survey found that:

So, the vast majority of people spend less than 30 minutes per meditation session. If you use a meditation app like Calm or Headspace, you’ll be able to find plenty of guided meditations that can be done in as little as a few minutes.

Remember, meditation is all about taking some time to give your brain a break. You’re clearing your thoughts and re-centering yourself. That doesn’t require an hour to do.

There are no rules for meditation. If you just came out of a stressful meeting at work, find a quiet place in the office or go to your car and get in a quick five-minute meditation session.

Or before you get ready to go to sleep, do a 15-20 minute meditation to empty out all that junk you’ve built up in your mind throughout the day. You know, the stuff that bounces around in your mind all night long and prevents you from sleeping.

The most important takeaway from this meditation statistic is that meditation isn’t a time-consuming task. It’s a much-needed mental break that you can give yourself throughout the day, for as long (or short) as you’d like.

If you look at the numbers behind stress and anxiety (spoiler alert, we're super stressed out), it’s not too surprising to see that the number one reason why people meditate is to reduce stress and anxiety. Meditation has long been promoted as a natural stress reliever, which part of the reason we write about it so much on Mellowed!

We all take on a lot of stress throughout the day, and your body’s natural response to it is to release hormones (epinephrine) which causes your blood pressure to rise, your heart rate to increase, breathe faster and a range of other effects. Meditation helps calm that down by sitting in stillness and really concentrating on your breathing.

Before we start getting too off-track here, just know that meditation is a great stress reliever, which is why it’s the top reason people practice it. Here are some of the other reasons people meditate: 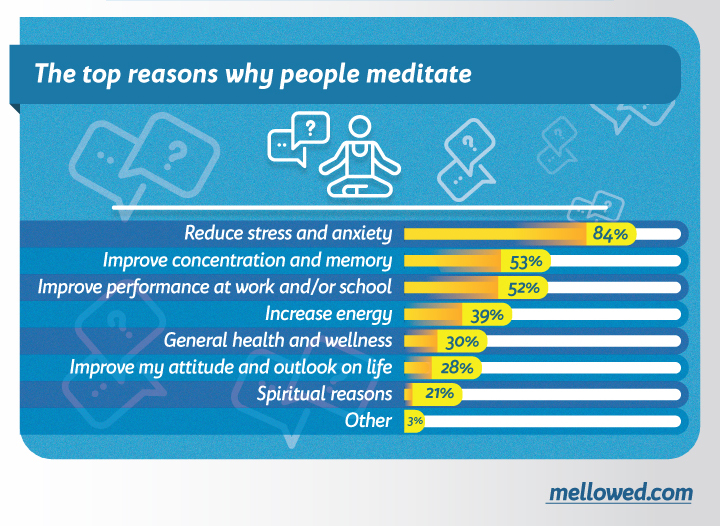 One of the biggest trends we saw from the survey was that people don’t just meditate for a single reason. They’re doing it to get all of the benefits above and more.

Some of you might be a little shocked to see the percentage of people using meditation for spiritual reasons. Because as we mentioned, over the past few years where meditation has been trending upwards, most people see it as more of a mental health practice.

However, meditation has been around for thousands of years, long before we started using it to reduce stress. It plays an important part in many Eastern religions, and we’ve adopted some of those practices here in America. But that’s our brief history lesson for today!

These stats just go to show that there are plenty of benefits to meditation, and not everyone will have the same experience.

People love group fitness classes. And people also love meditation. So it was only a matter of time until the two were combined.

Our guess is that it’s because it brings like-minded people together. I mean, who wouldn’t want to hang out with someone who’s into meditation?

But even with the rise of meditation classes, most people still prefer to meditate alone, with some opting for a mix of group classes and practicing alone. 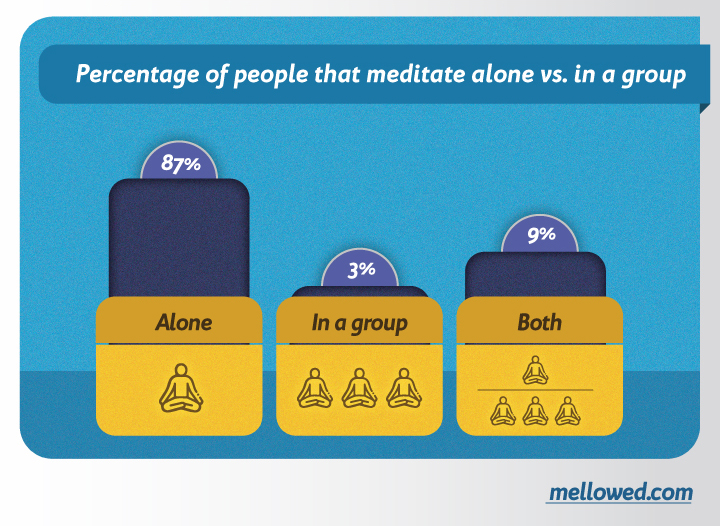 If you’ve never given a group meditation class a try though, we’d highly suggest checking one out if you have one near you. Some meditation studios offer a variety of services such as massages, acupuncture and other things designed to help you relax.

Now that we have a good sense of why people DO meditate, we were interested in finding out about the people who don’t meditate.

But first, we found that over half of the people who don’t currently meditate have at least tried it in the past. 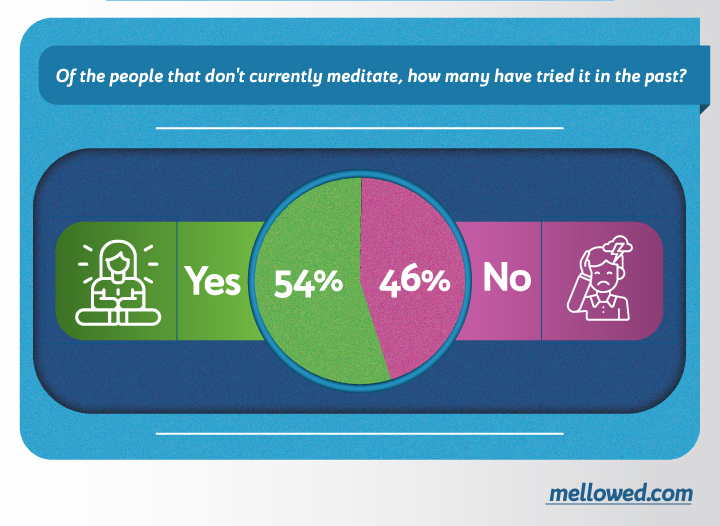 That means they’ve given it a try and it either just wasn’t for them, or they gave it up for some reason.

And here are some of the most common reasons why people don't meditate: 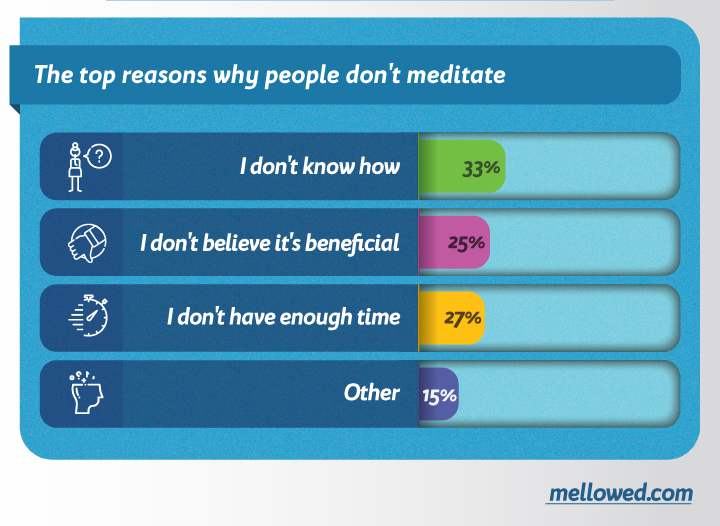 The not enough time group is interesting because as we saw earlier, most people spend less than 30 minutes meditating. So it could be less about not having the time, and moreso that it’s not a priority.

If you fall into that bucket, we’d suggest carving out 10 minutes of your day to give it a shot. You can get started with a guided meditation on an app or YouTube video. That also helps people who don’t meditate because they aren’t sure how.

Meditation can be difficult and straight up overwhelming for some people, particularly if your mind is constantly wandering. But what most people don’t realize is that meditation will actually help with that.

Think of meditation as an exercise for your brain. The more you do it, the stronger your ability to control your thoughts becomes. In order to get better at meditation, you have to meditate. And over time it’ll feel natural and you won’t sit there struggling for 15 minutes trying empty your thoughts!

Another interesting insight we saw from the survey was the “other” category. One of the most common trends we saw there was that some people don’t meditate because they feel it goes against their spiritual or religious beliefs. So again, we’re seeing a lot of people associating meditation with spirituality and religion.

Another common reason we saw for people not meditating was they find it boring. And let’s face it, the idea of just sitting in silence for even 10 minutes isn’t the most thrilling thing in the world. But sometimes those mental breaks are a big necessity in a world where we’re constantly inundated with “noise” every minute of the day.

If you find meditation boring, we’d highly suggest doing a guided meditation rather than just trying to sit in silence and figure it out, especially if you’re new to it. The good thing about guided meditation is there’s a voice talking to you so you’re not just trapped with your own thoughts.

Plus, depending on what type of guided meditation you do, the “guide” will often throw in some good bits of info to keep things somewhat interesting.

With all that in mind, you also have to realize that meditation just isn’t for everyone. While we suggest you give it a try, some people really struggle with it and find other ways to cope with stress, anxiety, and some of the other reasons we talked about earlier.

Hopefully these meditation statistics shed some light on how and why people meditate. With all the reported benefits, it’s well-worth giving it a shot.

How Does Sleep Affect Your Mental Health?

How Does Sleep Affect Your Mental Health?

What Does a Therapist Do?

What Does a Therapist Do?

When is The Best Time to Meditate? (Ideal Time for Meditation)

When is The Best Time to Meditate? (Ideal Time for Meditation)

How to Achieve Inner Peace in a Busy World

How to Achieve Inner Peace in a Busy World