How to Cope with Failure: 7 Tips to Bounce Back

I am no stranger to failure. As a teenager, I was fired from one of my first jobs working at a dollar store. I scraped by music college with a C average, only to fail to make it as a musician.

For months, I struggled to find work and bombed job interviews. When I finally did land a full-time job, I was let go after 3 weeks.

For the first 23 years of my life, I let those failures defeat me and make me feel like I would never amount to anything.

Over a decade later, I’m now a business owner with a lot of successes under my belt and a very positive outlook on my future. Yet, I continue to fail at things virtually every day. The only real difference between now and my 23-year-old self is what I do with those failures.

Failures in life are inevitable. But it’s how you cope with them that makes the difference between finding success and giving up.

Everyone tends to cope with failures in their own way, but some strategies have a more positive impact than others. So the next time you drop a big fail bomb, here is how you can work through it in a healthy way that serves you.

1. Face Your Feelings, Don’t Numb Them

If you just experienced what you consider to be a massive, hashtag fail, your first instinct might be to seek out relief from the negative emotions that ensue. Unfortunately, this can manifest in unhealthy ways, like overindulging in alcohol or stress-eating in an attempt to and numb what you’re feeling.

But avoiding your feelings in this way doesn’t get rid of them, it only postpones them while you do damage to your body and mind. Ironically, this leaves you even less capable of handling your failure.

Find a more positive way to work through it. Healthy coping strategies are productive rather than destructive. It could be in the form of meditation or journaling. Personally, I find that physical exercise is the panacea for just about any form of mental distress! The confidence boost you naturally feel after a sweaty workout will help you to face your feelings with a fresh perspective that will help you deal with the fallout.

Your failure may require some damage control. It’s important that you accept responsibility for your failure and do what you can to rectify any problems caused by it.

Some people tend to make excuses to try and remove themselves from blame, but this doesn’t do you or anyone else any favors. It only compromises your integrity and makes it less likely for you to succeed in the future.

On the other side of the spectrum are those who think their failure is the end of the world and feel branded by it. But beating yourself up over a failure doesn’t help anyone either.

If an apology is needed, then go ahead an apologize. But from there, you need to pour your energy into whatever remedial measures are needed to rectify the issue. Try to see failure as an opportunity to recover with flair!

We’re conditioned from an early age to fear failure and avoid it at all costs. We have these irrational beliefs that failing at something means we’ll never succeed at it.

But this line of thinking couldn’t be further from the truth.

All failures are extremely valuable. It’s an opportunity to glean lessons and get a better understanding of what works and what doesn’t.

So instead of seeing failure as the worst thing that could ever happen, embrace it as a teacher that is guiding you to success.

So rebrand your failures to more accurately depict what they are: stepping stones to success.

4. Use it to Build Resilience

Did you know that in order to build muscle, you need to damage it a little? Whenever you lift weights or do a physical activity you’re not used to, you’re actually causing tiny tears in your muscles, which is why you feel so sore the next day.

But then those muscles rebuild and become stronger than they were before.

Failure is like lifting weights for mental resilience. Building your resilience will prepare you for even greater challenges that you may face in life.

For example, there is no way I could survive the emotional rollercoaster of a freelance business if it weren’t for the resilience I built up over years of failures while working in the corporate world.

Often, failure has a lesson. But even if it doesn’t, it’s still an opportunity to grow.

5. Tune Out the Noise

Sometimes our failures do affect others. But so long as your failure didn’t have moral consequences, you need to tune out what everyone else is saying.

If someone is actively trying to make you feel bad about your failure, know that the only reason that they would do this is that it somehow makes them feel better about themselves. Unconstructive criticisms always come from a place of insecurity.

Sometimes this kind of noise comes from our own friends and family. They may even be well-meaning but can end up making you feel worse about your failure.

Whatever the intention of others, never let someone make you feel like less than you are!

6. Remember that You’re Human and Everyone Fails

If you didn’t fail, you wouldn’t be human. We all do it. We all have to do it. Just remember that other people are usually very good at hiding their failures.

To put this in perspective, try Googling, “successful people who failed”. You’ll find 490 million results and countless stories of how famous people failed time and again before finding success:

The examples go on and on. So cut yourself some slack! 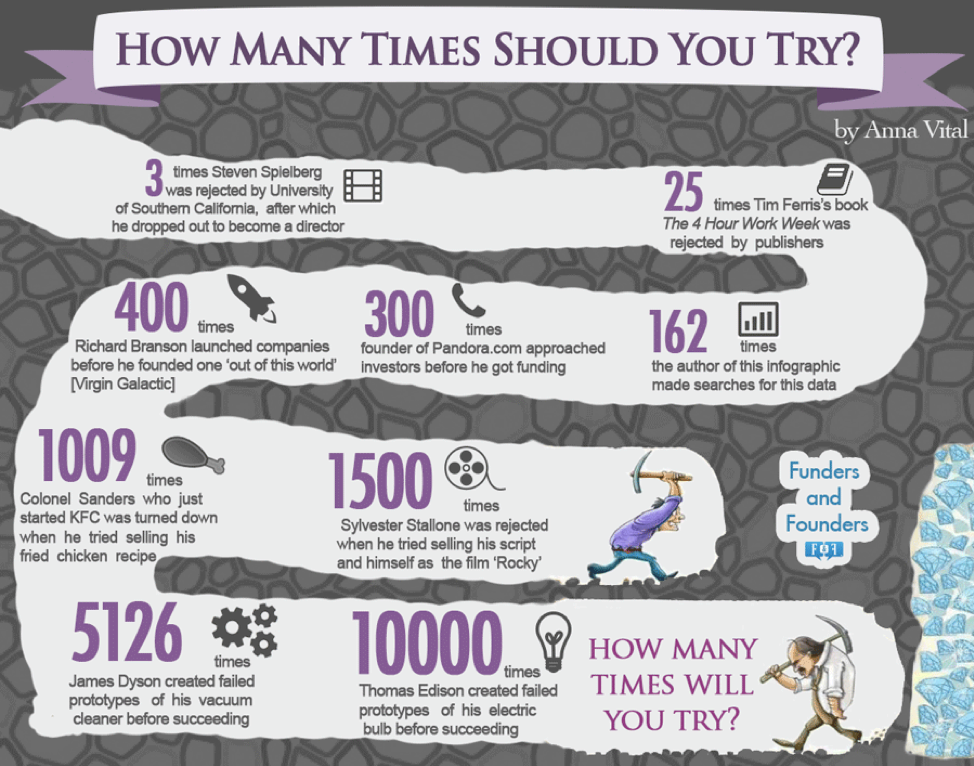 One study found that a whopping 92% of the population don’t achieve their goals. But you know what that remaining 8 % never do?

Moving on and not giving up is arguably the most important step to working through your failure. If you have taken all the previous steps, you will find it naturally easier to let it go.

Remember that effectively coping with failure isn’t about rejecting your feelings; it’s about reframing your perspective, regrouping, and trying again and again until you succeed.

Because as the famous writer, Elbert Hubbard, so succinctly put it, “There is no failure except in no longer trying.”