You know the feeling – your eyelids are slowly closing, your body is relaxed and at ease, you’re warm and drowsy. For a few seconds, everything is right in the world until…

At first it’s high-pitched and light, and you think maybe, somehow, the tea kettle was left on. Or, more irrationally, maybe it’s just a pig squealing. Or maybe a horn?

That’s when all signs of sleep wear off and you realize. It’s your boyfriend snoring. Again.

No amount of pillows over the head or kicking him seem to wake him up.

It’s going to be a long night.

The Problem: Loud Snoring That Keeps Everyone Awake

It’s not a new problem. Snoring has been forcing couples to split or sleep in separate rooms for decades. It wakes up the kids, scares the pets, and can even alert your neighbors if you live in an apartment.

It’s loud, it’s unpleasant, and it can lead to hostility in your relationship. Trust me, I know.

I’m an extremely light sleeper and I struggle to fall asleep most nights. I need near perfect conditions, including a small amount of white noise and a pitch black bedroom in order to doze off.

It never fails though; just when I’m starting to finally fall asleep, the snoring next to me kicks in.

And it makes me cranky. And angry. It’s an irrational form of anger that you only experience when you’re really hungry or really tired. Living with this night after night has made my sleeping even worse, and makes my boyfriend feel guilty about even trying to fall asleep.

We’ve tried some remedies. My boyfriend has slept on his side, but that did nothing. He’s tried propping up with pillows, but still the snoring persists. He’s also tried allergy medicine and nasal strips, both of which had other benefits, but sadly, curing snoring was not one of them.

We finally gave up and fell into our angsty bedtime routine, where I’d be eventually make my way to the couch most nights.

Then we heard about Good Morning Snore Solution, a simple mouthpiece that claims it can finally get rid of snoring once and for all. But could it really fix our sleepless nights? 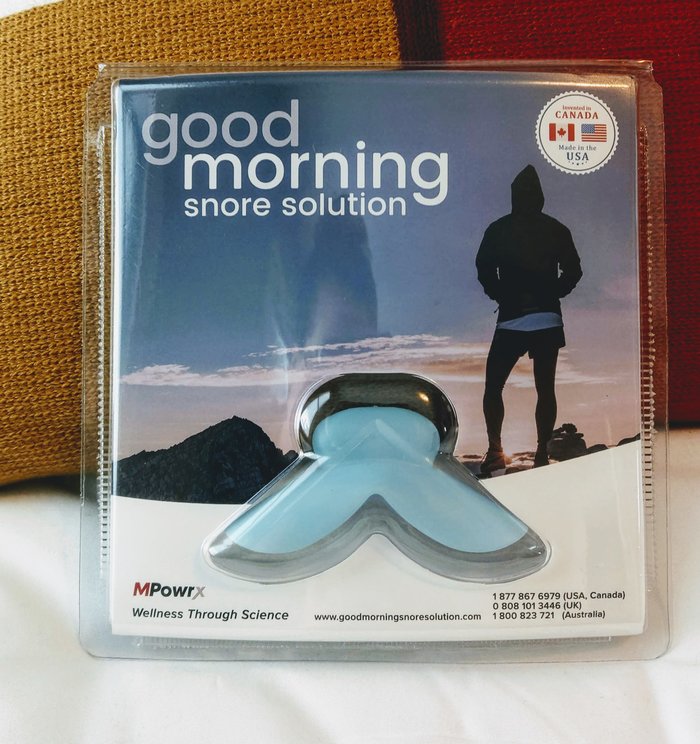 Good Morning Snore Solution claims to work by stabilizing the tongue. The mouthpiece has a small slot for the tongue to rest, which brings the tongue forward, clearing blocked airways. The website claims this mouthpiece is comfortable and effective, and is even backed up by a clinical trial.

While all of this sounds fantastic, I have to admit, I wasn’t expecting a miracle. We’d tried a cheap mouthpiece from the drugstore once, only to find it on the floor in the middle of the night.

So, needless to say, I wasn’t expecting too much.

We received the mouthpiece rather quickly, and decided to try it out that night. Here’s what you need to know:

It took my boyfriend longer than usual to fall asleep, because he was adjusting to the fit of the mouthpiece. He finally fell asleep close to my bedtime (12:30 am), and I was able to fall asleep very quickly.

I woke up at 3:30 am from a loud eruption of snoring only to find the mouthpiece on the floor. My boyfriend doesn’t remember taking it out, but it’s pretty unlikely it fell out. He’s a heavy sleeper, so I assume he took it out without fully realizing what he was doing.

Verdict: Overall, not a successful night.

This was a good night for me, but not my boyfriend. He fell asleep first, as usual, and I fell asleep around 1am, which is fairly typical. When I woke up, it was 8 am, and I was blissful. It worked!

Sadly, no. My boyfriend woke up around 2am from discomfort. He said it wasn’t extreme, but once it woke him up, he couldn’t fall back asleep. So, he took the device out and he slept on the couch that night.

Verdict: A little better, but still a long way to go.

This night my boyfriend found the mouthpiece much more comfortable and fell asleep more quickly than usual. He did wake up a couple times throughout the night and took the mouthpiece out and rinsed it due to a buildup of saliva. He fell back asleep within 10-15 minutes each time.

Verdict: I slept soundly all night.

This was the first night we both slept soundly all night long! He did go to sleep later than usual and had to be up earlier, but we’re still considering it a success.

Maybe he was feeling brave after the night before, but he ended up taking out the mouthpiece around 4 am, and I woke up promptly at 4:14 am, when his snores began. I woke him up and he put the mouthpiece back in for the next two hours, but when he woke up in the morning, he claimed it felt uncomfortable again.

Verdict: Still some kinks to work out.

The Good Morning Snore Solution does exactly what it claims: it stops snoring.

There is a period of adjustment that you should expect, though. It’s not that the mouthpiece is actually uncomfortable, it’s just that you have to get used to sleeping with one in your mouth.

This handy device has helped us both get more restful nights than usual, so we’re sticking with it and hoping it becomes even more comfortable with use. If you’d like to give it a try, you can grab one here!

Organifi Green Juice Review (Read This Before You Buy It!)

Organifi Green Juice Review (Read This Before You Buy It!)

6 Best Stress Relief Toys for Adults to Fidget With

6 Best Stress Relief Toys for Adults to Fidget With

Headspace Review: Is it Worth Subscribing?

Headspace Review: Is it Worth Subscribing?