If you’ve been on YouTube in the past couple years, you’ve most likely seen live streams of anime girls (or racoons) studying to chill beats featured on your home page. 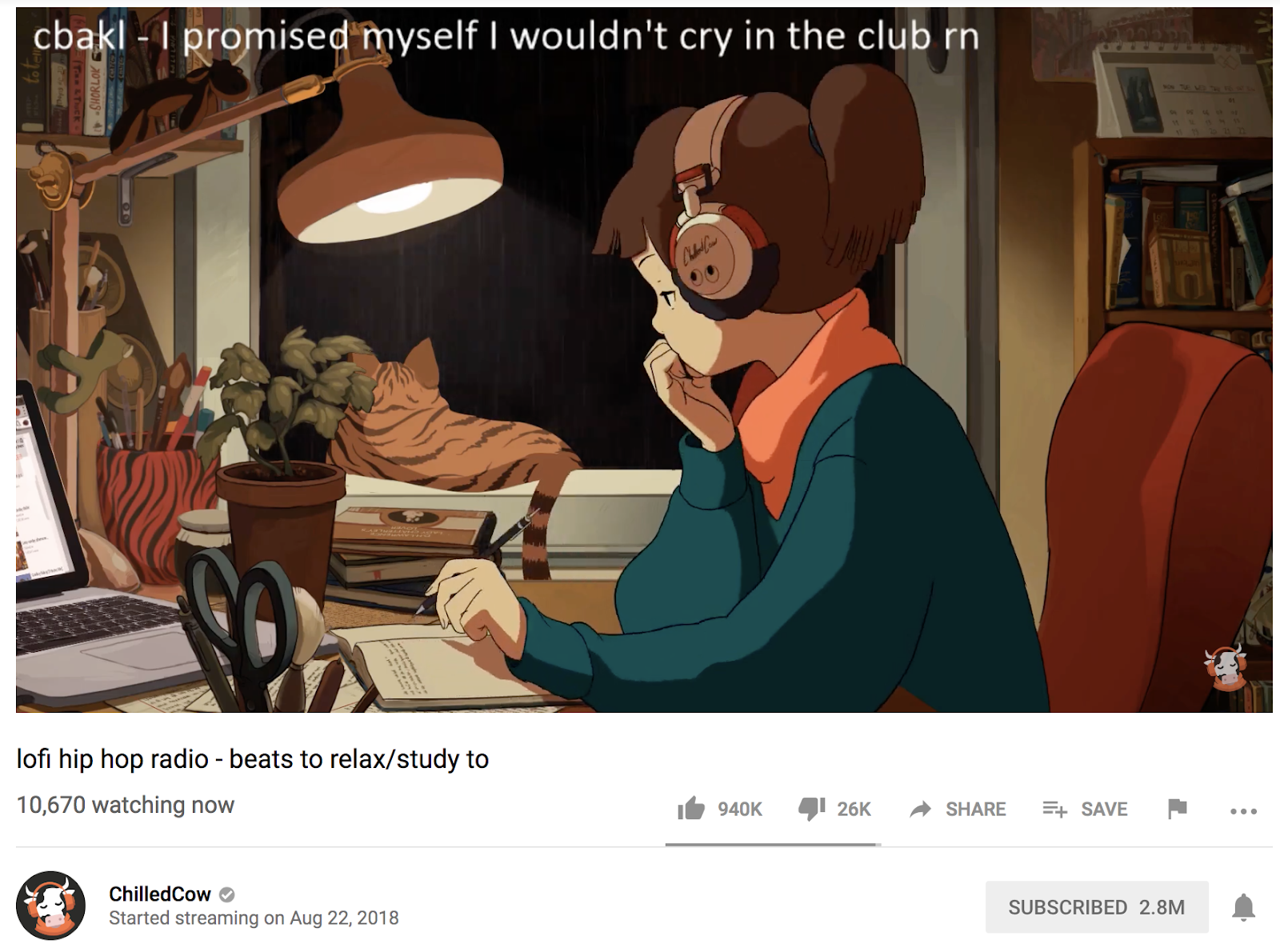 These are the lofi hip hop YouTube channels, popular enough to amass millions of subscribers and infamous enough to become its own meme.

However, lofi hip hop isn’t just a passing fad. In fact, this music trend may relieve stress and help young people deal with the overwhelming bleakness of the world they’re growing up in.

So what exactly is this new music phenomenon, and more importantly, how can you get in on the action so that you can start chilling, too?

What Is Lofi Hip Hop?

According to Genius, the “lofi” in lofi hip hop stands for “low fidelity”, which means music made to sound like it’s recorded at a lower quality. There may be skips or crackling effects recorded in to give it a vintage, retro feeling, and the songs usually don’t have lyrics. A look at Google Trends for “lofi hip hop” shows that this trend started coming into its own in February 2017 and has stayed heavily searched ever since.

The languid beats of lofi hip hop are usually handpicked and put into a rotation by YouTube channels that stream 24/7, set to a short clip of an anime character studying or relaxing. Millions of subscribers have discovered fresh lowkey tracks this way, finding it easier to tune in to these tastefully curated live streams rather than going through the trouble of compiling their own playlists.

Based off the titles of these videos, the creators of these live streams say they’ll help you relax, study, focus, or sleep better. Lofi hip hop has even helped the man behind popular lofi hip hop YouTube channel, “NEOTIC” (featured below), deal with his anxiety attacks. This makes lofi hip hop a music genre that could very well have a powerful effect on mental health, making it a potential source of stress relief.

To begin experiencing the calming effects of lofi hip hop, tune in to the top 10 lofi hip hop YouTube channels to relax and study to below:

The oldest and most established of the lofi hip hop YouTube channels, ChilledCow is at the forefront of the genre—it’s even the originator of the whole anime aesthetic for lofi hip hop, since its stream was the first to feature a loop of an anime girl studying beside a picturesque view.

Founded in March 2015 in France, there isn’t much known about the creator behind this massive channel. However, since it’s the staple of lofi hip hop, your listening journey should really start here.

Based in the Netherlands, Chillhop Music’s live stream features an adorable animated raccoon typing away at a laptop. A strength of Chillhop Music is its near omnipresence across a variety of platforms. So no matter what service you use to listen to music, you can access Chillhop Music’s selection there.

Additionally, Chillhop Music has thriving communities on Discord, Reddit, and Facebook. So, if you’re looking for a warm place to chat about your favorite lofi hip hop artists and songs, these would be a great places to go.

If you’re looking for dreamy beats to help you sleep or relax, The Bootleg Boy has you covered. Not much information is available about The Bootleg Boy, other than the fact that his YouTube channel is from the U.K. However, The Bootleg Boy accepts song submissions through Soundcloud DM’s, so if you think you have exceptional music taste, you can give it a try.

Fun fact: The Bootleg Boy has a poll open for voting on the name of the lofi girl pictured in the YouTube live stream, making it easy to immediately feel involved with this channel.

Based out of Ohio, Ambition is a lofi hip hop YouTube channel with a clear angle on boosting mental health. With “beats for depression/anxiety” in the title and an image of a sad girl perched on the roof of a house as the featured image, Ambition’s live stream is aimed towards relieving people of their mental pressures.

Thus, for those of you who are seeking to break into lofi hip hop listening specifically for mental health purposes, start with this channel.

Ambition also has a Discord, so if you would like to share how listening to Ambition’s picks has helped you get through a tough week, join the discussion.

Based in Columbia, NEOTIC is a lofi hip hop YouTube channel with a melancholic slant started by Steven Gonzalez. NEOTIC’s videos present listeners with somber beats and snippets of morose dialogue played over depressing images from The Simpsons, making it a part of the meme-tastic Simpsonwave sub-genre of music.

Interestingly, NEOTIC also operates as a record label where artists release songs under its banner. So if you like the music featured on the stream, follow NEOTIC’s social media for updates regarding the artists and their releases.

With the goal of introducing their army of subscribers to yet undiscovered music, College Music is a YouTube channel with a distinct demographic: stressed college students who need a relaxing study aid.

Based in the U.K., the creators of College Music put together a Spotify playlist that they update daily, so if you hear a song you like in the live stream, you can find it and reward the artist directly by streaming his or her song.

You can also submit music suggestions by email or even buy the creators a pint for their hard work.

If you like your music more on the electronic side, nourish. might be more your speed. Similar to NEOTIC, nourish. functions as a record label, where artists release chill, electronic music under its brand. Nourish.’s music videos consist of its beats played over aesthetically pleasing, sometimes sensual images that help listeners unwind.

With its NSFW name and rougher aesthetic of an anteater smoking on a couch in a dirty apartment, STEEZYASFUCK’s lofi hiphop YouTube channel immediately feels different from the others when you click into it.

Based in L.A., the music that makes it onto this live stream has an urban feel that appeals to feelings of anemoia, making the music a soothing, yet undeniably cool listen.

If you’re familiar with the kind of beats STEEZYASFUCK offers, you can submit music recommendations.

A lofi hip hop YouTube channel out of South Korea, Mellowbeat Seeker’s pretty, jazzy tones are easy on the ears. The featured image of a chill couple hanging out on a motorcycle parked on the side of an overpass is somehow both wistful and romantic, as does much of the content on Mellowbeat Seeker’s Instagram.

So for those who are interested in lighter fare, this is the lofi hip hop live stream for you.

Also, you can also check out underground South Korean indie music in a separate live stream on Mellowbeat Seeker’s channel, which is a unique element of this channel.

Unlike the other entries on this list, City Girl is a lofi hip hop artist, rather than a compiler of lofi hip hop. With her whimsical aesthetic, beautiful melodies, and pensive titles, City Girl’s music seeks to bring a certain scenario to mind while you listen.

This makes your listening journey all the more creative and unique. And since she’s the artist, by streaming her music, you are directly compensating her, so stream away!

Also, if you’re as entranced by the starry artwork featured alongside City Girl’s music as I am, check out the talented Vicki Tsai’s Twitter or donate to her Patreon.

Do you have your own favorite lofi hip hop YouTube channels or artists? If you do, share them below and let’s all sit back and relax to the chill lofi hip hop beats together!