If you’ve ever taken medications with nasty side effects, you might understand why many people turn to herbal remedies. For thousands of years, plants found all over the world have been used by people to combat physical and mental health problems.

What about people with social anxiety? Are there herbal remedies that can reduce anxiety levels without costing side effects, like many medications?

Research on the value of herbs as anxiolytics, or anxiety-reducers, is sparse and varied. Some studies show limited promising results, while others don’t find any connection between herbs and anxiety relief at all.

But anecdotal evidence reported by thousands of herbal treatment users is herbs help, even to aid anxiety in all its forms.

What is Social Anxiety?

According to the Social Anxiety Association, social anxiety disorder (or social phobia) is the fear of social situations and interacting with other people. It includes fear of judgment, an ultra-awareness of your actions and over analysis of the reactions of others.

A social anxiety disorder affects nearly all aspects of your life, and it generally doesn’t go away on its own—not without the help of therapy or medication.

Symptoms and effects of living with social anxiety include physical ones such as dizziness, heart palpitations and sweating, and social effects such as few friendships and low self-esteem. Anxiety disorders can often run simultaneously with depression or other mental conditions.

The best way to treat social anxiety is by seeing a medically trained doctor. Before starting any herbal supplement, speak with your doctor to make sure it’s a safe choice. Some medications may interact negatively with herbal supplements, so check if it’s safe before you start taking an herb.

How Do You Treat Social Anxiety?

Pharmaceutical medications are often prescribed to help people manage social anxiety, but lots of them come with side effects. That’s why some people turn to herbal supplements.

Lots of studies on the anxiolytic properties of herbal treatments are inconclusive, meaning they don’t provide enough evidence that herbs reduce anxiety. However, other studies have found promising results showing that herbs may indeed be able to relieve symptoms.

More studies still need to happen, so for now, we only have current literature and anecdotal evidence regarding herbs and anxiety. 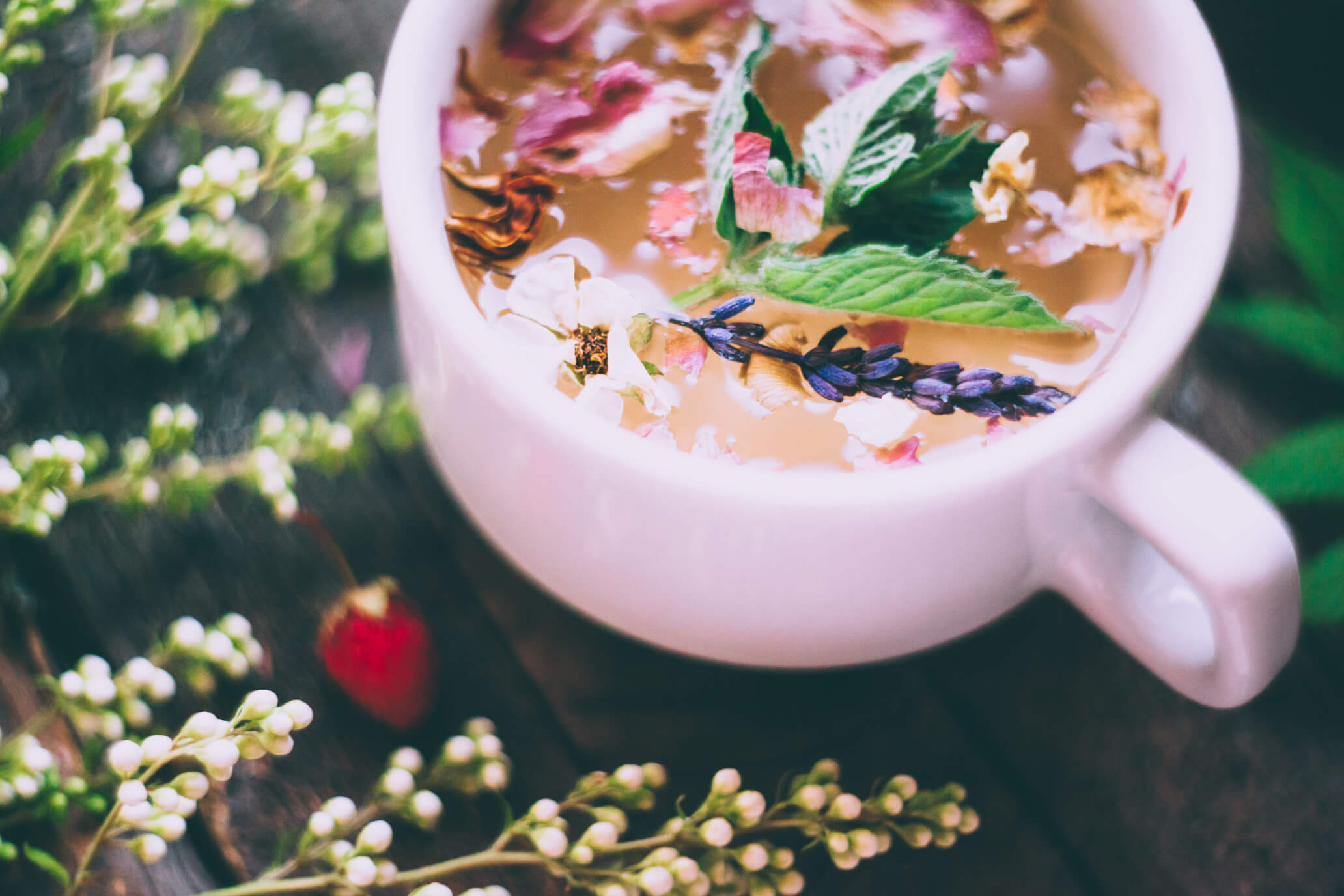 If you’re on the fence about taking prescription medication, or simply want to try a more natural solution, here are six of the best herbal supplements for social anxiety:

There’s evidence that passionflower (Passiflora incarnata Linn.) can be effective in the treatment of anxiety disorders, including social anxiety.

Some human trials have confirmed passionflower’s positive effect on anxiety. One study showed it was as effective as benzodiazepines for anxiety relief but had a slower onset of relief. However, passionflower is often used in conjunction with other herbs, so it’s hard to measure how much anxiety-relief is due to passionflower alone.

This herb is generally considered safe, but it’s been known to cause drowsiness, dizziness and confusion in one trial. Other potential side effects are generally mild, including dizziness, fatigue, confusion and impaired coordination.

This herb was traditionally used in Europe and North America to promote sleep and relaxation. In other places, such as Brazil, passion flower is used medicinally for pain relief, asthma relief and sedation.

Limited data show it’s possible to treat anxiety symptoms with chamomile in short-term use. Other studies have even found some evidence that long-term use of chamomile can decrease generalized anxiety disorder (GAD).

Generally, the tea and powder forms of this supplement are the most popular. Chamomile is a very safe herb, and people can have up to a few servings per day. However, it shouldn’t be taken with coagulant medications or before surgery.

Kava kava, or just kava, is part of a drink prepared in the Pacific Islands, used both in social and ceremonial contexts. The drink comes from the plant Piper methysticum.

Kava seems to have anxiolytic properties, but it’s not sedating or mind-altering. This makes it appealing to people searching for social anxiety relief. While it does seem to be one of the more promising herbal treatments for anxiety, kava may also have side effects on liver function.

One study found evidence of liver damage from kava use, even in short-term use. It’s thought that the quality of kava can make a difference on liver toxicity, and liver toxicity is actually very rare, according to other studies. However, kava is still banned in Europe and Canada due to these risks.

We do know that kava has effects on the central nervous system. This is thanks to the unique chemicals it contains called kavalactones. One study showed that kavalactones target GABA receptors, which help regulate anxiety.

Kava shouldn’t be used long-term or in large amounts because it can cause a serious health disorder. However, most studies have found that in dosages less than 400 mg/day, negative side effects shouldn’t occur.

Lavender (Lavandula angustifolia) is a flowering herb known for its pleasant scent and pleasing purple buds. It originated in the Mediterranean region. In the past, lavender was used to mummify bodies in Egypt, where it was also used as an antiseptic and a mental health aid.

Evidence is preliminary and limited, but supports that lavender can help with anxiety when taken orally or through aromatherapy during the short term. One study showed that lavender essential oil reduced anxiety in patients with coronary artery disease.

Lavender is the least harmful essential oil. Its side effects are mild, and include: constipation, headaches, increased appetite or rash. However, it can increase the sedative effect of other medications or cause low blood pressure.

The most common form of lavender is an essential oil meant for aromatherapy. You can also make tea or tincture with dried lavender, it can be cooked or taken in the form of a pill.

Lemon balm (Melissa officinalis) is in the mint family and emits a sweet, lemony scent just as its name implies. Studies have suggested that lemon balm works with the GABA receptors in the brain, making GABA, a stress-relieving component more available.

Studies show that lemon balm can reduce some nervousness and excitability associated with anxiety. It’s well-tolerated and safe for short-term use, but can cause nausea and abdominal pain.

Too much lemon balm can have negative effects on anxiety, and more than 0.6 grams has been shown to actually increase anxiety levels. Lemon balm also has antimicrobial and antioxidant properties.

It can be taken as a tea, added to food or as an essential oil in aromatherapy. This herb can potentially interact with other drugs, such as sedatives and thyroid medications.

Various studies have proven that rhodiola rosea is an adaptogen, which means it can aid in the regulation and relief of physical and emotional stress. Traditionally, it’s been used to treat fatigue and depression, and it’s also been used to enhance exercise performance.

Side effects of rhodiola rosea can be mild to moderate, including headache, upset stomach, drowsiness, dizziness and insomnia. Certain medications, such as SSRIs, shouldn’t be combined with rhodiola rosea.

The broad recommended dosage for adults taking rhodiola rosea is about 100 mg to 300 mg per day, and it’s available in capsules, teas and other forms. There’s not enough evidence about the herb’s safety for it to be used in children.

Are Herbal Supplements Effective for Anxiety?

Herbal remedies have been used to treat stress and anxiety for hundreds and thousands of years. But how do you know if they can really help you with social anxiety?

Though it’s minimal, the research so far suggests that herbs may help with anxiety in general, which can be extended to social anxiety. Evidence has shown that many herbal treatments contain chemicals that work with the brain’s GABA receptors, which in turn, play a role in stress management.

It’s possible that some of the research supporting herbal supplements comes from the placebo effect—meaning patients looking for relief want herbal supplements to work so badly that they unconsciously trick themselves into feeling better.

Some studies also seem to suggest that the combination of different therapeutic herbs creates a stronger effect. The jury’s still out on herbal supplements and their ability to help with social anxiety. More studies need to be performed, especially in human trials.

Because of insufficient evidence, herbal supplements aren’t regulated by the FDA like other drugs. That means you don’t know what you’re getting. These products’ purity, quality, sourcing and other information aren’t guaranteed.

How do you know if the dosage on the bottle matches what’s inside? The best way to buy herbal supplements is to choose reputable suppliers who use third-party lab testing to display the quality of their products.

Then you can be confident that you are consuming quality products that are clean and pure. Remember to check with your doctor before beginning any herbal supplement.