Alcohol & Stress: Everything You Need to Know

When stressed out, people often reach for things to help them feel rest and relaxed. These things often include prescription and recreational drugs, and alcoholic beverages.

People have been drinking alcohol and debating the benefits and downsides for tens of thousands of years. And the debate will probably still be going on well into the future. Not because the science won’t figure it all out, but because we can’t agree on how much alcohol is too much.

Regarding the mental and physical health, alcohol is definitely a double edge sword. Moderate consumption of alcohol is shown to reduce risks of cardiovascular diseases, gallstones, type 2 diabetes, and can have a calming effect on our brains too.

Some people use alcohol to “shut out” their emotions after a job loss, breakup, or some other life stress. Because consuming alcohol makes us sleepy, it can seem that drinking relaxes us and relieves anxiety. It’s okay to have a drink here and there, but if you need it to “solve” something, you might have a problem.

Can Alcohol Relieve My Stress?

No and yes! Drinking too much alcohol is bad for you regardless of your levels of physical or mental health. Alcohol alone is not a stress reliever! The act of drinking is pleasurable, and the pleasure is what alleviates stress.

The social, physical and psychological benefits of consuming alcohol can’t be ignored and may contribute to our overall well-being. A glass of wine before a meal can improve digestion and soothe us at the end of a stressful day. The drink here and there can be a social tonic. As with everything in life, it is only important to find a measure in alcohol consumption too.

How Much Alcohol Is Too Much?

Moderate alcohol consumption has a calming effect on our brains because the act of drinking is pleasurable. If you have a nice glass of wine with a meal, you make the meal more pleasurable. It’s the same with stress. If you have a drink to relax after work, or you have several of them with friends over the weekend, by making the weekend pleasurable you alleviate the stress. Everything that causes pleasure can be used as a stress reliever, we just have to be smart with it.

Like with caffeine, there’s no “one size fits all” answer here either. A drink is considered to deliver about 12 to 14 grams of alcohol. According to the CDC:

We’re all different and everyone’s body responds differently to alcoholic stimulation. One person’s head will feel fuzzy after only one drink. But someone with higher alcohol tolerance might not feel different even after several drinks. If you won’t respect the general rule, it’s very important to find your own measure. 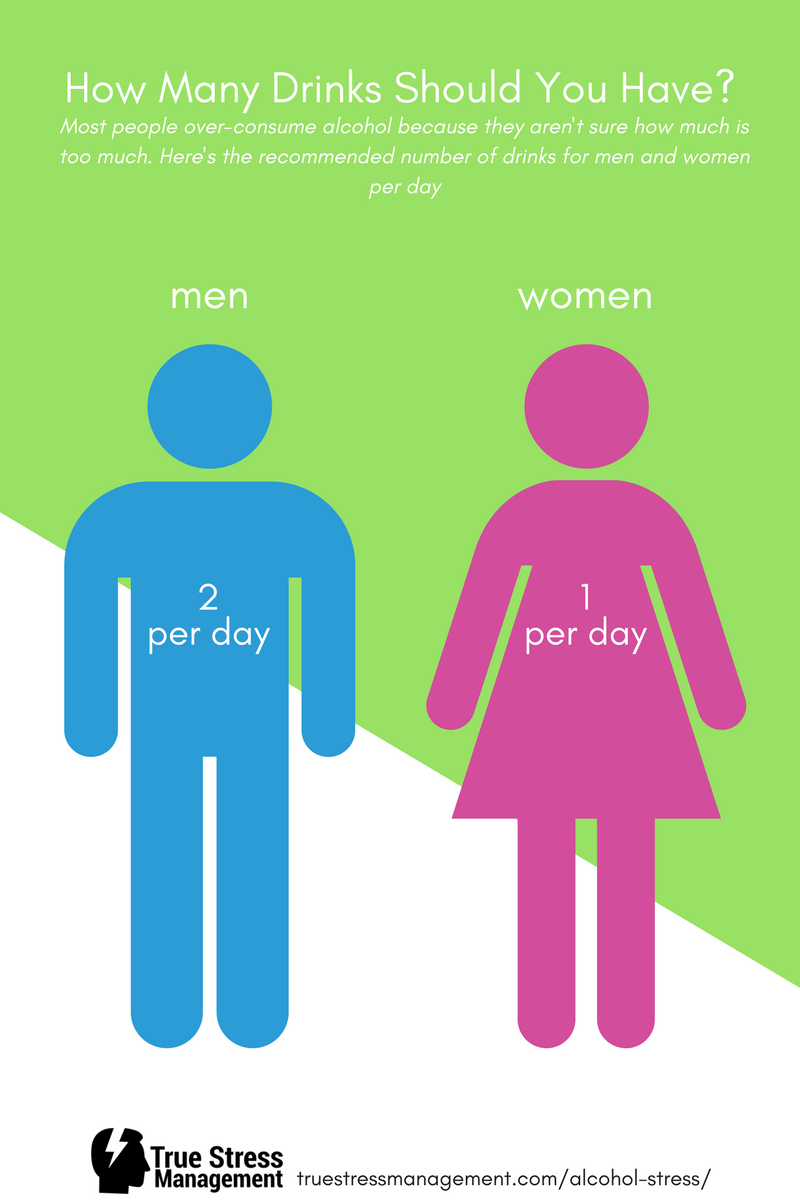 The Two-Faced Nature of Alcohol

According to Arthur L. Klatsky, M.D. moderate drinkers are at lower risk of developing coronary artery disease (CAD) than both heavier drinkers or abstainers.

This two-faced nature of alcohol consumption doesn’t come as a surprise. The active ingredient in alcoholic beverages is a molecule called ethanol. It affects the body in several different ways. Ethanol affects the stomach, brain, liver and gallbladder directly. Additionally, it also affects insulin, cholesterol and triglycerides levels in the blood, as well as blood coagulation and inflammation. It can affect mood, coordination, and concentration.

The rate of heart disease in France is comparatively low despite the nation’s diet that includes plenty of cheese, butter, and chocolate, the thing known as a “French Paradox”. Science has suggested that this is because of the red wine that the French consume in moderate amounts every day.

Alcohol is Actually a Depressant

When it comes to stress, anxiety, depression or any other psychological issue – the time you feel like you need the drink is most commonly the time to keep the cabinet locked.

The first sip of beer causes changes in two types of brain chemicals that direct much of alcohol’s effects on our thoughts and feelings. One of the chemicals, called glutamate, causes excitement and makes the brain more active. Another one called GABA acts like a sedative and calms the brain. Ethanol increases GABA function very quickly and this is why a drink relaxes us so fast.

In fact, GABA and glutamate imbalance first affects the frontal lobe, which is the part of the brain responsible for attention and planning. This area is very sensitive to alcohol – this is why we become so disinhibited and impulsive, according to Anne Lingford-Hughes, professor at the forefront of research into alcohol’s effects on the brain and Chair in Addiction Biology.

This is a moment when everybody should stop drinking, because one of the next areas to be affected is the cerebellum – the part at the base of the brain at the back of the head. This is the part responsible for movements and speech.

When we stop drinking, the brain tries to re-adjust to the situation. When the alcohol is out of our system, glutamate still keeps exciting the brain. This causes shakiness, moodiness, anxiety and poor sleep. Heavy drinkers call this a “bad hangover”. As we get older, it takes longer for the brain to recover after every drinking session.

Balance Is the Key

Alcohol is a depressant. Drinking too much leads to bad decisions and acting on impulse. People often lose jobs, relationships, and money. Heavy drinking can lead to depression, and this is not what you have in mind when ordering that third beer, right?

Find that small window where the level of alcohol intake is good for your mood, without risking your overall health. If you don’t like alcohol, there’s no reason to start drinking only to relieve stress because there are numerous healthier ways to de-stress. Doing something positive can take your mind off your problems. Try going for a walk in the park, hot tea, or meet up with someone you love.  Exercise is a great stress reliever too.

If you are a drinker, keep it in moderation–not more than a drink if you’re a woman, and two if you’re a man. Remember, it’s ok to have a drink to socialize or celebrate and unwind. But never drink to elevate your mood only. Alcohol doesn’t make the stressful situation go away, it just acts as anesthetic, making you less aware of them.

As human beings, we’re resilient. We can suffer a lot and deal with many things in life, all we need is time. Time heals. The problem with heavy drinking and stress is that alcohol hits the pause button and makes the healing process a lot longer. Alcohol can even add more problems and you now not only have the stress and the struggles you’ve dealt with before, but now you have cravings and alcohol addiction. Dealing with stress sober is much more efficient.

In conclusion, alcohol doesn’t help with removing the stress out of your life, but if occasional drinks bring pleasure and this pleasure means less stress–go ahead. Just don’t go overboard with it!